Most designers start their interior decoration with a captivating area rug and continue from there. This is why getting to know rug designs is important when you want to define the style of a space.

This is where our blog can help! Today’s topic and insights are on mid-century modern area rugs and their vast interesting features.

What are Mid-Century Modern Rugs?

Most of these rugs feature patterns created upon ovals, circles, rectangles, and other clean shapes. What clean means, in this case, is an absence of small details and embellishments. In fact, mid-century modern design solutions are considered somewhat minimal like abstract art.

While the movement lasted from 1945 to 1969, the mid-century style remains a celebrated and desired look amongst interior designers even nowadays.

Why Is Mid Century Modern Look So Popular?

Mid-century modern is a look that many people seem to like and appreciate.

While taste and preference remain subjective, one reason why this look is so popular might be attributed to the unique fusion between modern and vintage that a mid-century modern style offers.

Mid-century modern design can elevate the atmosphere and beauty of a space through its timeless feature. It manages to add character to a room while still allowing it to remain minimal, contemporary, and fancy.

Going for a mid-century modern interior is a bold move, but one that never goes out of style.

This style reminds people of an era of positive developments that came right after a long period of war. Indeed, this could probably be another reason why it resonates with so many designers.

How Do You Style Mid Century Modern Furniture With Rugs?

Mid-century modern interiors are fashionable, stylish, and fancy. They are a composition of interesting furniture pieces and creative rugs that. Once combined, those two main interior design elements can really make a statement.

If you are not sure how to mix and match furniture and rugs to compose a well throughout mid-century modern style, here is a tip.

Decide on what type of mid-century look you want to go for, whether a bold one, vibrant mid-century style, charismatic, retro, eclectic, or Scandinavian, and go from there.

For a bold look, choose a rug with brown shades to enhance the strong character of the furniture. These could be wooden tables, sofas, and armchairs.

In this case, you can also layer a few rugs in different shades of brown, starting from faded beige.

For a more vibrant mid-century look, choose some bold geometric shapes in both furniture pieces and rugs. Make a statement by matching monochrome rugs with bulky sofas, or even large patterned rugs with thick-framed tables.

This combination will create a stylish and gorgeous look that can resonate with different personalities.

Alternatively, you can choose a palette rich in color and consisting of a patterned rug with vintage neutral furniture to create a subtle yet perfect personification for this style.

The charismatic mid-century modern interior can be achieved by matching wooden furniture with oriental or exotic-looking rugs. These could be shaggy rugs, Moroccan rugs, or even Oriental motifs.

Such a combination will create a warm space full of character and contrasting colors that are stylish and timeless.

If you want to achieve a retro mid-century style, combine shag rugs with sleek wood and steel furniture pieces. This ensemble will create a vintage vibe and subtext in the room, that will translate into a cozy retro style.

Make sure to pick a medium size rug and place it in the middle of the room, without having it touch the furniture. Combine it with floor lamps and wooden coffee tables for a better look.

The eclectic mid-century modern interior is colorful, fun, and cheerful. It features the rug as a focal point, anchoring the rest of the furniture in the room. This style is perfect if you have light brown hardwood floors.

The rug in this scenario should have an eclectic pattern full of squares and circles in different colors such as beige, gray, teal, orange, and red.

If this is the style for you, then opt for a monochrome rug combined with contemporary modular furniture pieces.

You could also choose to add color to your mid-century modern interior with block colored rugs combined with black or muted furniture tones to create a stylish decor.

The mid-century modern style is quite flexible, however. You can pick a few characteristics from one look and combine them with another to create a more unique feeling.

So the best advice on how to style furniture with rugs, in this case, is to be creative within the mid-century modern framework.

Mid-century modern rugs come in a variety of sizes, shapes, colors, and patterns. You can use them in bedrooms, offices, dining rooms and obviously living rooms.

Here are some of the most popular mid-century modern rug designs for 2021.

This green-hued rug is an excellent choice for anyone looking to spruce up their interior with a subtle retro-chic vibe.

This is a great color scheme with a unique pattern and design that can instantly uplift the surrounding furniture and give the room a mid-century modern look despite anything else.

Mid-century modern is an elegant and charming style that can also show itself through powerful contrasts such as in this case: a bold vibrant blue couch combined with a toned-down beige rug.

The stylized geometric lines of this shag rug provide a beautiful background for the bold furniture pieces that compose the living room, surrounded by white calming walls.

In addition, the looped pile creates a warm feeling that complements the wooden furniture and overall injects personality and casualty to the living room.

Repetitive patterns are a classic mid-century modern feature. This monochrome repetitive diamond-patterned rug is a great choice for a Scandinavian interior, vibrant, or bold look.

It’s a fashionable pattern depicted through bold black chunky lines makes it a perfect statement and focal point in a room.

Some mid-century modern interiors really flourish when they display dark tones such as this image. The large clean dark floor is a classic feature of mid-century modern that looks fancier by the oriental rug which infuses it with color and detail.

The boldness of the living room is accentuated by the vivid green couch, perfectly marching the deep dark red tones of the rug. The floor and the rug however remain the gravitating point of the entire room.

The color choices in this room make the space feel warm, chic, and less likely to fade.

This mesmerizing orange rug just had to be part of this collection.

Orange is a statement color of mid-century modern interiors. The understated geometric patterns in the Santamaria Geometric Orange Area Rug never go out of style.

As a result, this rug can be integrated in many different interiors, whether living room, bedroom or dining room, and spruce up the space with a vibrant new atmosphere.

You can pair this rug with wooden furniture or even steel framed pieces. It goes well with chunky couches as well.

In terms of style, you can use this rug for an overly eclectic setting full of bright colors, or a more subtle look where it can be paired with single-tone furniture enveloped by white walls.

Sometimes you just need a simple rug to pull together the entire space and make it look complete. This low pile Jute rug works perfectly well within this mid-century modern office.

The subtle tone of the rug allows the warm color of the armchair and desk to be the focal point of the room.

While in many cases the rug is the gravitating point of an interior, there is no harm in letting it be a supporting piece that provides warmth and charm to the space without overwhelming it.

The most distinguishable features of a mid-century modern piece, whether furniture or rug, are lack of embellishments, sleek look, minimal lines, solid block colors, and low profile.

Mid-century, on the other hand, refers to the time period rather than a design movement.

Therefore, a chair could be produced during the mid-century era (thus between the 1950s and 1970s) but it does not mean it is a mid-century modern piece.

What's the difference between modern and mid-century modern?

Modernism is the style that comes right before mid-century modern. This style is characterized by clean, crisp, and cold lines and shapes.

What colors are mid-century modern?

The mid-century modern design movement is characterized by a deep and bold color palette consisting of mustard, red, brown, teal, lime, and, last but not least, pink.

The following combinations are quite popular in mid-century modern designs:

A mid-century modern house is minimal and full of color. It can look vintage, retro, or even Scandinavian.

These homes are obviously covered in rugs, patterns, and bold tones. They may contain wallpapered walls and very few accessories.

Most mid-century modern houses will contain the following rugs:

What style came after mid-century modern?

Why is mid-century modern so expensive?

Mid-century modern is a movement based on originality and authenticity. This is also why it is so expensive.

Every piece included in a mid-century modern interior should be coming from a noteworthy designer instead of being a mass-produced replica. 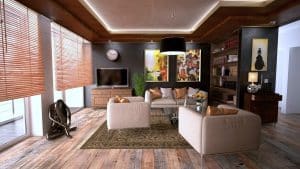 How to Place an Area Rug in Living Room, Dining Room, Bedroom & Kitchen
1 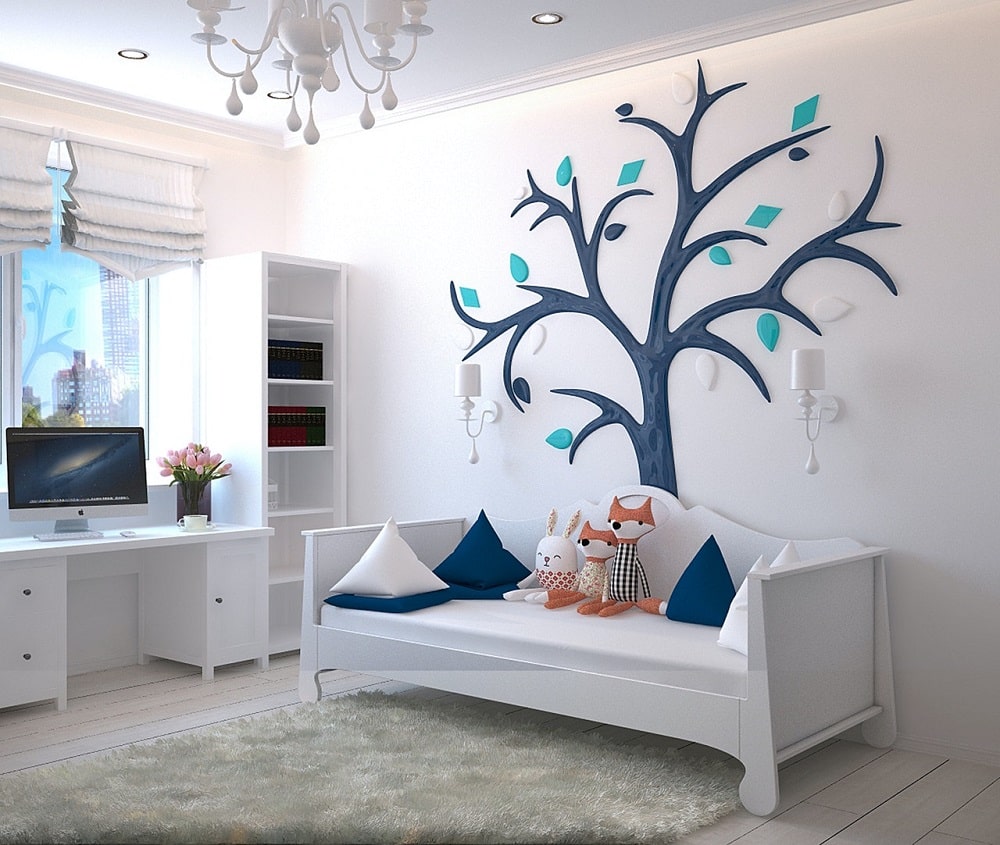 10 Tips for Decorating Your Kids’ Room with Area Rugs
2 How to Match Throw Pillows and Area Rugs
3 How to Combine Area Rugs in an Open Floor Plan
4 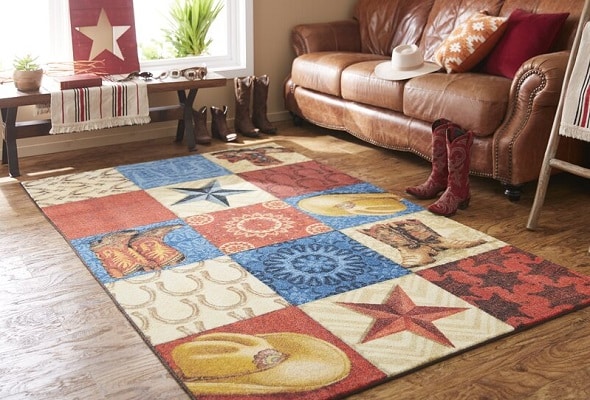 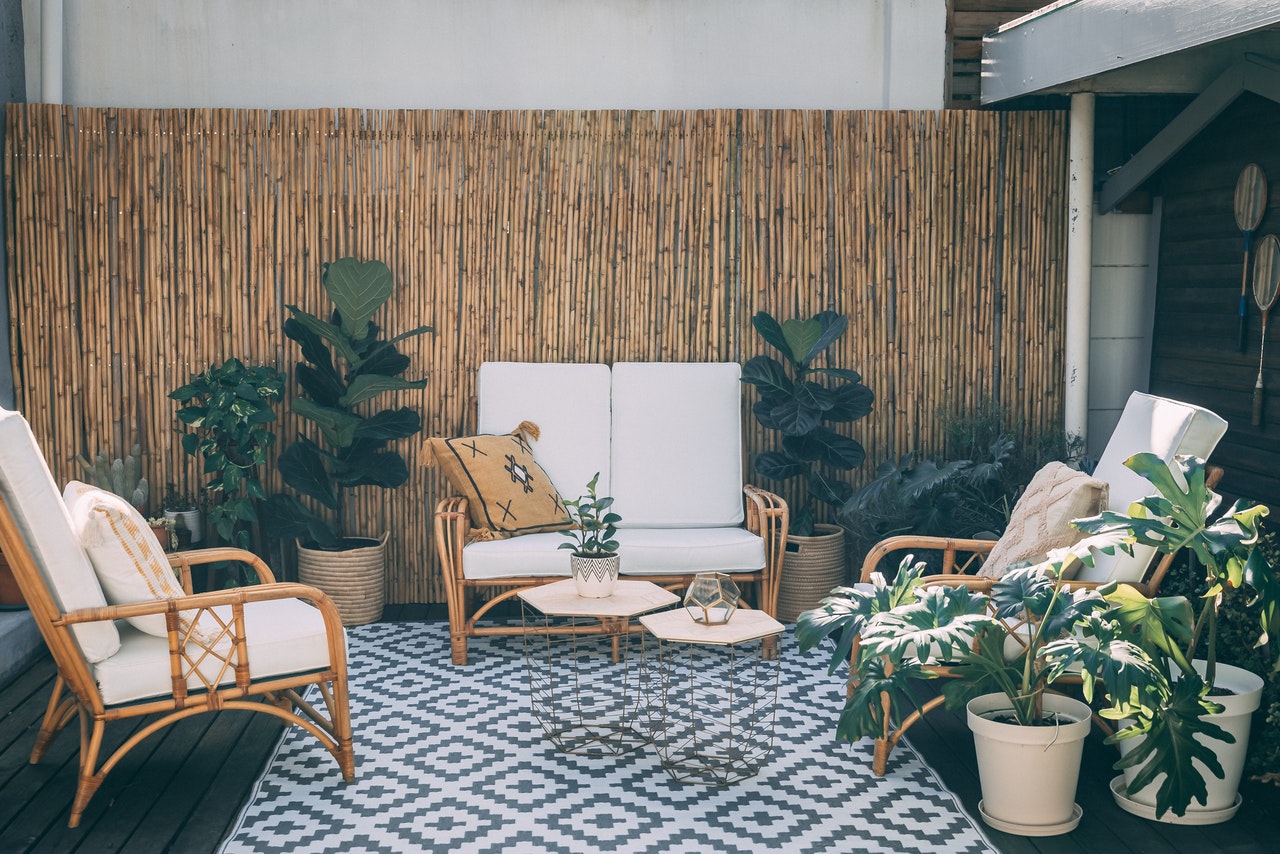 How to Stop Rugs Slipping on Carpet 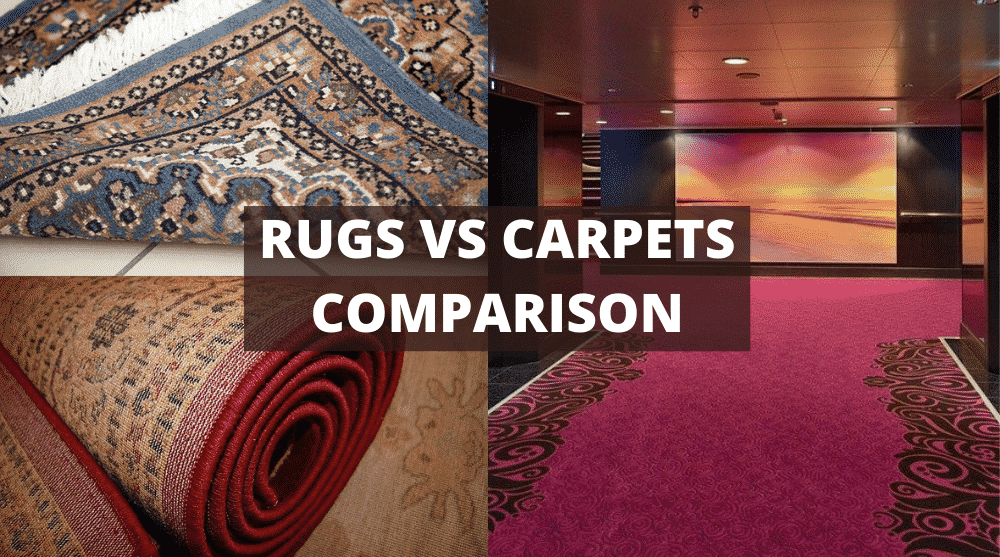 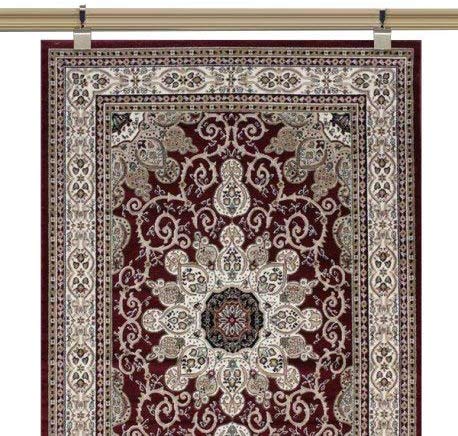 What Size Rug for King Bed
3 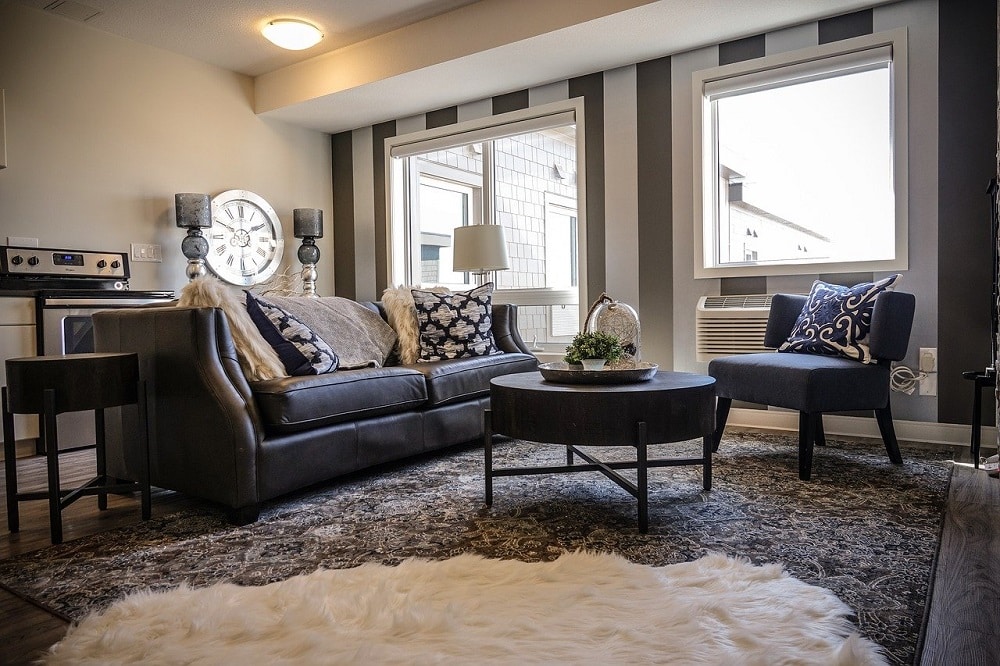 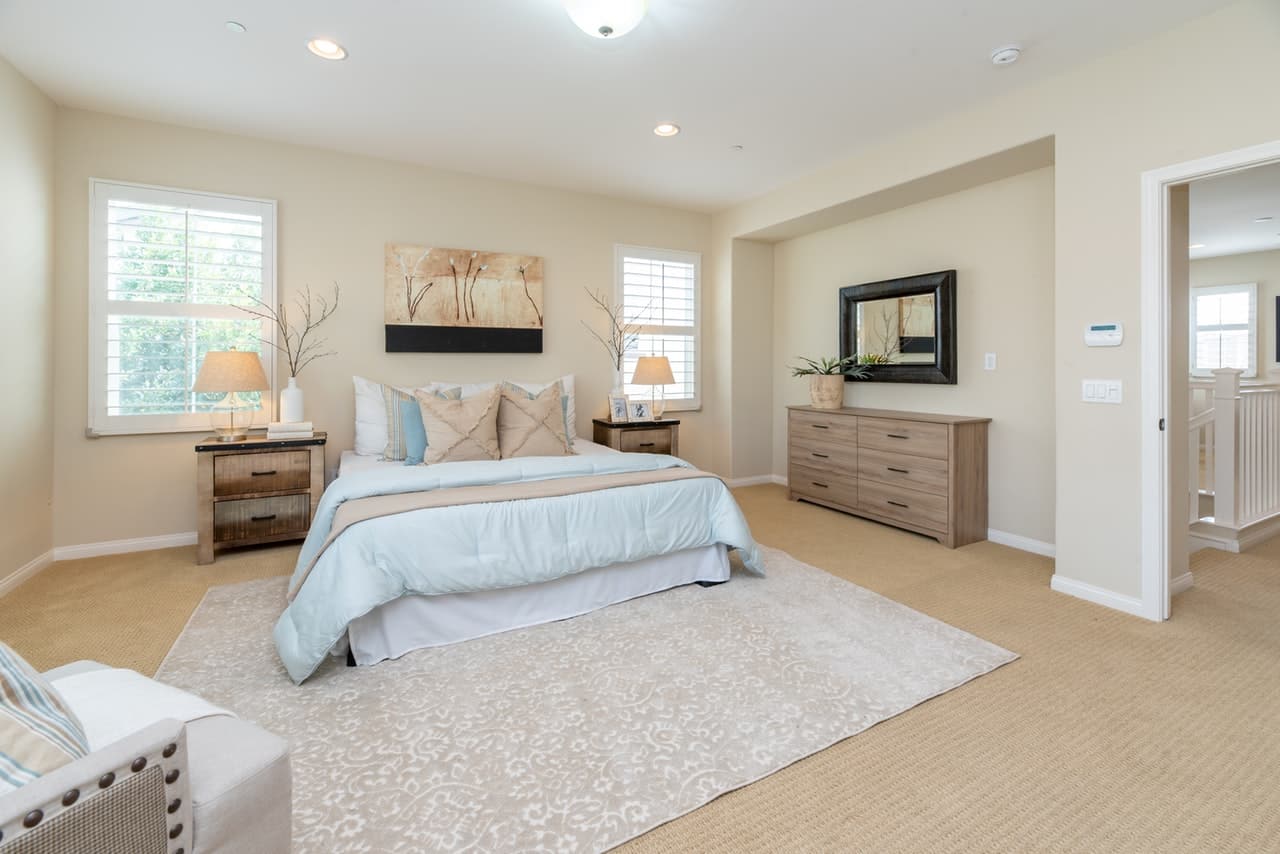 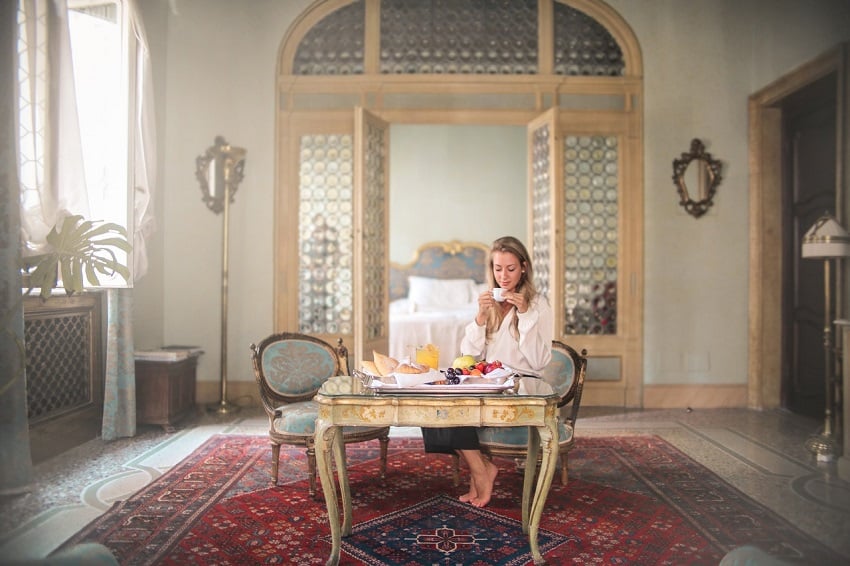 How To Choose an Area Rug Color 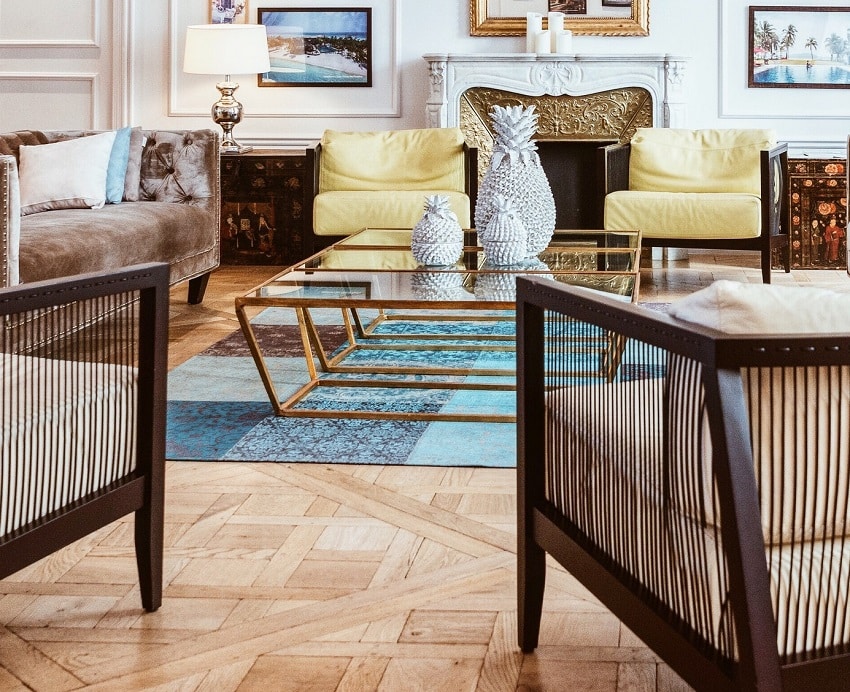 5 Ways on How to Hang a Rug on the Wall

What Size Rug for King Bed